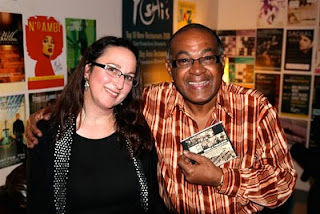 Dancing last night to Pupy y Los Que Son Son reminded me why I fell in love with Cuban music in the first place: it's all about making the dancers happy. No frills, no self-involved solos or see-who-can-play-more attitudes with this band. Pupy makes people feel good with rock-solid grooves, a trio of singers who take turns at the lead vocal role, and a solid group of young musicians with an absolutely positive vibe. Hanging out with Pupy the day after the first SF Yoshi's show reaffirmed my belief that he is one of the biggest sweethearts in all of Cuba. So humble, so genuine. Oh the stories we heard today...if the walls of that restaurant could talk we would have enough material for several books on a Who's Who of Cuban music...:-) 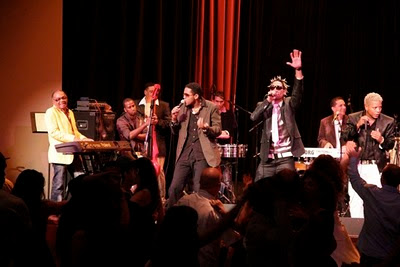 
Here is a brief clip of yours truly jamming with the band - big fun!

Posted by Rebeca Mauleon at 5:16 PM No comments: 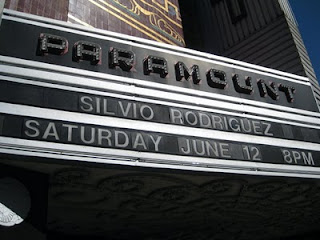 While it had been over three decades since Silvio Rodriguez' last U.S. appearance, he had never visited the San Francisco Bay Area. We knew this was going to be special - we just never knew HOW special. At first the 3,000+ seat Paramount Theater in Oakland, CA seemed marginally full, and we wondered if the house would fill up given the steep ticket prices ($65 being the lowest). However, at 15 minutes past showtime one could sense the near-capacity crowd's excitement.

The show began with Silvio's 5-piece group performing a beautiful instrumental number, and when he took the stage the audience erupted for a near five-minute standing welcome as the band held on to a repeated refrain, waiting for the crowd to settle down so Silvio could begin singing. Once he did, the two and a half-hour set did not disappoint as Silvio intertwined well-known classics with selections from his new album. As is typical for a Silvio concert, the audience sang along the moment they recognized the familiar tunes such as "Sueno con serpientes," "La gota de rocio," "Ojalá," "La maza," "Canto arena," "Pequena serenata diurna" and many others.

What struck me the most was the extraordinary transformation of much of his well-known repertoire. Given the instrumentation (tres, two guitars, flute/clarinet, bass and drums/percussion), Silvio's music seemed to shine on an entirely new level with intricate arrangements, at times twisting Cuban country music with reggae, Bach-infused guitar riffs with Brazilian samba - this was Silvio Rodriguez in a musical make-over. His voice was as fresh as I've ever heard - he was truly in top form and clearly relishing the exquisite and expert accompaniment from his top-notch ensemble. The primary difference between this show and performances of decades past was the glow of countless cell phone cameras, all eager to capture a moment of this historic appearance; imagine a group of Latin-style "Dead-Heads," only instead of audio recorders, everyone is fiddling with some type of digital gadget - tweeting and blogging while singing along to the quintessential Latin American troubadour. 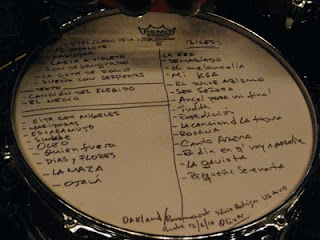 With each of the four standing ovations Silvio gave the crowd one beloved song after another, with shouts of "Viva Cuba libre!" and a humorous "I love you Silvio" in a heavy Spanish accent emanating from the balcony.

I can only imagine how moved he must have felt being in our beautiful Bay Area for the first time, surrounded by a largely 40-and-over multi-cultural (mostly Spanish-speaking) crowd without the slightest hint of "controversy" nor any semblance of negativity. Next he moves on to So Cal (Universal City) and winds up in Orlando (??????). I don't think anything will top Carnegie Hall and the Paramount, but that remains to be seen (and heard). I can only say that this is a tour not to be missed.

Tonight...Pupy y Los Que Son Son at Yoshi's!! The Cubans are certainly back!
Posted by Rebeca Mauleon at 11:37 AM No comments:


A preview of Silvio's show. Click here for a New York Times review.

Looking forward to the Paramount Theater next Saturday!
Posted by Rebeca Mauleon at 5:57 PM No comments: