Once in a great while there comes along an individual with such enormous talent, vision, imagination and creativity that it is impossible to fathom. Juan Formell is that person. He was, simply put, the Cuban musical equivalent of Mozart, of Duke Ellington, of The Beatles - he singlehandedly transformed the cultural landscape of the island in the second half of the 20th century, and continued to revolutionize popular music in the 21st century, as his beloved band, Los Van Van, celebrated 45 years of creating the most intoxicating dance music on the planet. I say this because I will forever be a "Vanvanera" - the ultimate fan - and his musical legacy is without a doubt one of the most unprecedented in Cuba's history.

I had the great honor and pleasure of meeting Formell for the first time in 1990 after having played his songs in several bands in the US over the years. Los Van Van were playing in the small town of Bejucal, a Havana suburb, and video camera in hand, I climbed up on stage to film a few minutes. In the era before social media, Cuban musicians knew full well that our intentions were honest and honorable; we were there to study and learn from the masters, and these video gems were our lessons. Afterward, Formell invited a few of us to his home for what would be the first of many wonderful encounters filled with music, laughter and more than a few sips of Cuban rum. Seeing Los Van Van live in Cuba after only having experienced them on records was transcendental, to say the least. Every song instantly brought about an immediate response from the audience of frenzy and unbridled joy. People of all ages and races danced and sang together, and what blew my mind was how well they knew every nuance of every single song - the breaks, the multiple choruses (or what Formell referred to as sobre montunos), every detail was a part of the audience's collective memory, and they too were performers, often being called up on stage to exhibit their sensual dance moves. What's more, he was able to chronicle the daily lives of the Cuban people in a way that defied traditional norms and convention while staying true to the dance-loving public. He was a musical chameleon, filled with a musical curiosity that was often in direct violation of the political system. He listened to Elvis, to The Beatles, even to The Monkees, and he did so during a time of great personal and political risk in post-revolutionary Cuba.

During the early 90s as cultural exchange programs, research, and music festivals brought me to the island, I found myself in the enviable role as Formell's translator during lectures, clinics or performances, and would always be blown away when the band would ask me to sit in. Nothing I had ever experienced came close to the ecstasy of playing on stage with this powerhouse band while thousands of Cuban fans gyrated their hips in perfect unison, simultaneously singing along to every chorus. As I continued my research into the wealth of Cuban music and history, I found myself spending quality time interviewing and learning from Formell as well as timbales legend José Luis Quintana "Changuito." Not only were all of the members of the band (including pianist César "Pupy" Pedroso) some of the most knowledgeable musicians I had met, they were also completely humble and accessible. They shared their exquisite treasure trove of information with me in exchange for the simple joy of camaraderie and musical companionship. I understood even more why it was that Cubans refer to Los Van Van as "el tren" (the train): they are and continue to be a joyous ride of relentless grooves, and everyone is welcome on board!

When we learned that the band would finally tour the US in 1997, we prepared for their long-overdue Bay Area appearances with great anticipation, and it was clear that the San Francisco Bay Area community was ready to celebrate with them. A few of us invited the band to see the Giants (at Candlestick Park), threw a welcome dinner at Cha-cha-chá restaurant in SF's Haight Ashbury District (Chinese-Cuban owner León was thrilled to have the band in house), and had more than a few parties and jam sessions. After one of the shows my husband and then 2-year-old son and I were hanging out with the band at their hotel, and I had the great fortune of asking Formell a few questions about the Cuban clave and his compositional process. He gave me one of the best responses any of us Cuban music lovers could imagine: he said that the most important part of every single composition he wrote was the GROOVE. The hook came first, he said; if you've got a strong hook, the story will follow. And man, was he right. There is not one person in the crowd at a Van Van show who does NOT know the hook of every single song!

Over the years I would see the band as our tours would coincide - we shared the stage in Seattle at the Bumbershoot Festival when I was touring with Mickey Hart & Planet Drum - but would never have imagined the drama and controversy that would unfold in 1999 when they played in Miami. How quintessential that despite the media circus that ensued, the band would rise above the hoopla and claim their first of several Grammy awards in 2000.

In 2010 they returned to San Francisco to play at Yoshi's, and I was not about to miss it. As my husband and I made our way to the dance floor in front of the stage, the band came on and commenced to blow the roof off the place. After the opening 20-minute medley of hits (!), Formell, not knowing we were in the house, made the most gracious and touching comment about our support for the band and for Cuban music. It will remain etched in my brain as one of the best moments of my personal and professional life, not only because it reinforced how absolutely genuine Juan Formell was, but how much he valued the Bay Area's musical community and our advocacy of his music. The world has lost another icon, but the music he created will last an eternity, and I am humbled and grateful for the wisdom, musicality and insatiable grooves that he has left us. Rest in peace, Maestro Formell. 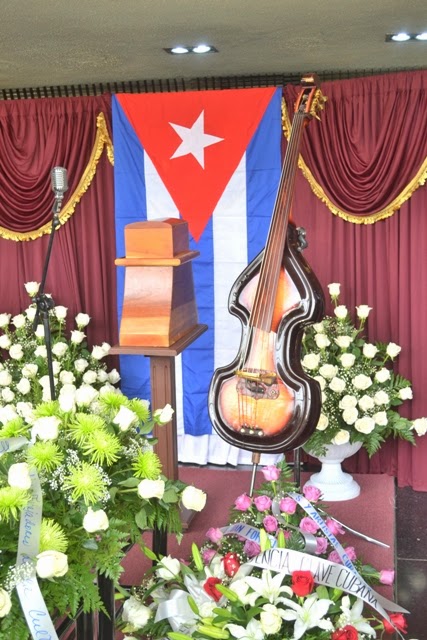 P.S. Here is a lovely biographical article by cubaabsolutely.com

Posted by Rebeca Mauleon at 10:53 AM No comments: